An animal welfare charity has issued a new warning to “think twice” before choosing a flat-faced breed after the death of a dog in their care.

Poor Leonard died after emergency surgery to help him breathe.

He had problems with Brachycephalic Obstructive Airway Syndrome (BOAS), a condition that occurs in dogs bred with short, flat, “squashed” faces.

Leonard, seven years old, a French bulldog, had breathing problems due to the distinctive features of his breed, which were so severe that he even had difficulty eating.

This was one of the worst cases the charity has ever seen.

The little guy was covered in pressure sores on admission, leading the team to believe he was being kept in a box and used for breeding before he was found on the street.

He was also terribly thin, had sores on the folds of his nose, and was diagnosed with a urinary infection upon admission. 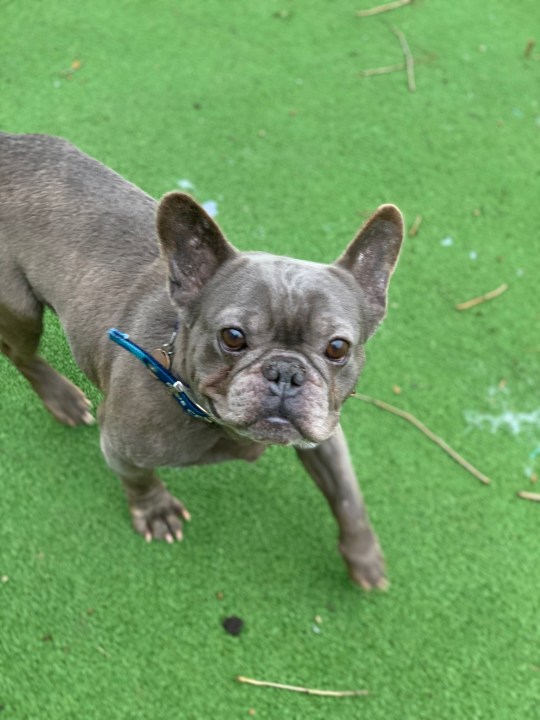 Leonard when he was first admitted (Image: Blue Cross 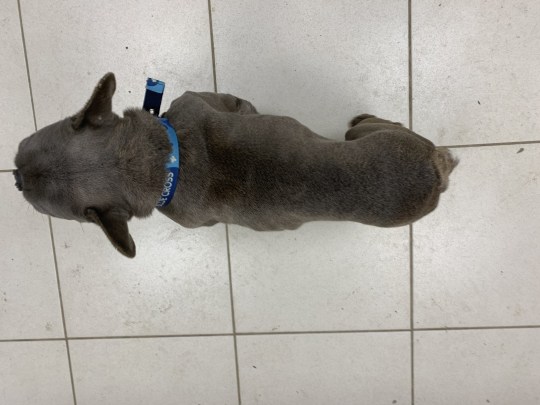 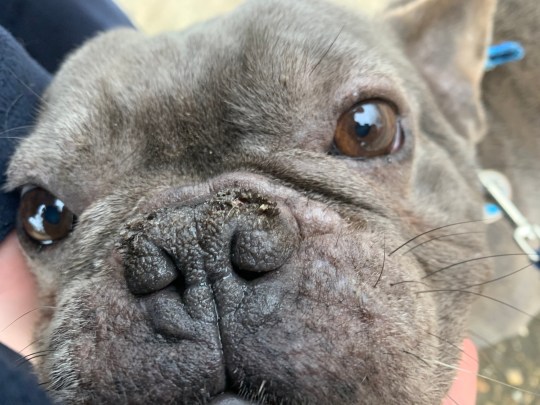 The wounds on his nose (Image: Blue Cross

As you can hear in the clip below, Leonard was really struggling to breathe and often made snorting, wheezing, and gasping noises.

Jenna Martyn, Center Manager at Blue Cross said, “Leonard couldn’t breathe through his nose at all.

“He could barely eat because he had to switch between breathing and chewing and was only getting oxygen through his mouth. There was always a risk that he might suffocate.

“He would have these bursts of energy so he wanted to be an energetic dog. And his breathing would just stop for him because then he would just have to stand there and gasp for breath.

“Walking around the park, chasing a toy or having fun with friends, Leonard couldn’t have done that.”

The only thing that could be done to help Leonard’s breathing problems was to have an operation to widen his nostrils and remove part of the soft palate at the back of his mouth. 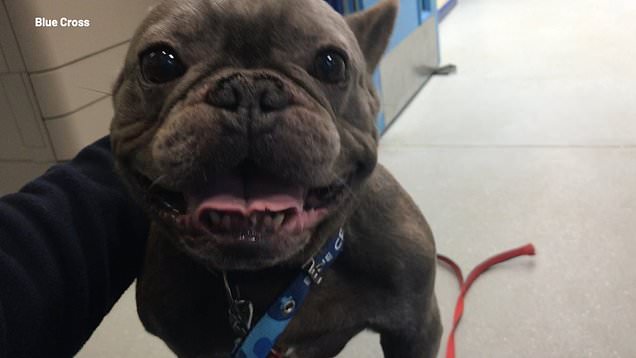 To view this video, please enable JavaScript and consider upgrading to a web browser that supports HTML5 video 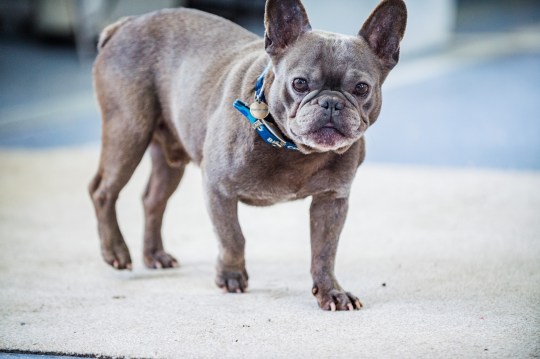 He has improved a lot under the team’s care (Image: Blue Cross)

Breeds with flat or bruised faces are known as brachycephalic.

They have a shorter upper jaw and snout, but the same amount of skin and soft tissues around their nose, mouth, and throat that can block their airways and make it difficult for them to breathe.

Surgery can help, but Blue Cross emphasizes that there is no quick fix for these dogs and that the complicated procedure carries risks.

They indicate that up to a quarter of dogs will experience any complications during or after surgery, and up to 4% will die during or shortly after surgery.

Brachycephalic breeds are more at risk under anesthesia for many reasons, including the fact that it is harder to get oxygen into their bloodstream. 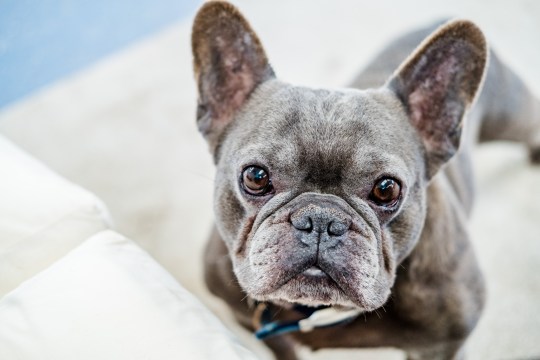 “Walking around the park, chasing a toy or having fun with friends, Leonard couldn’t have done,” said Jenna (Image: Blue Cross)

Unfortunately, little Leonard did not make it through his recovery and died in the hospital just a few hours after the operation.

Alison Thomas, Head of Veterinary Services at Blue Cross, said, “Unfortunately we have to do more of these surgeries just to make it easier for these animals to breathe. Many people view this surgery as a quick fix to these problems as it is a normal procedure for these dogs.

“While surgery can help, it is not a complete cure. Even after surgery, many of these dogs will continue to have difficulty breathing. These breeds often suffer from additional health problems such as eye problems, skin diseases, and joint diseases.

“We encourage anyone considering adopting a brachycephalic breed of dog, cat, or rabbit to do real research and understand the care they will need throughout their lives.”

These types of breeds remain popular everywhere, with prices rising as high as £ 10,000 per puppy online in some parts of the country. 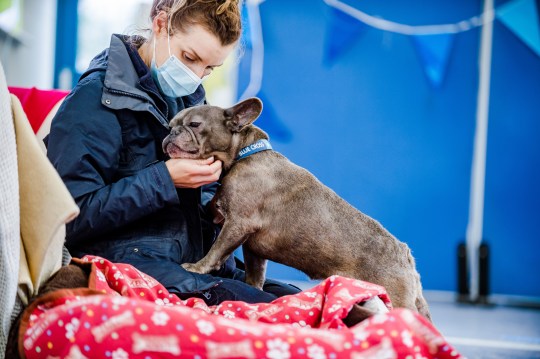 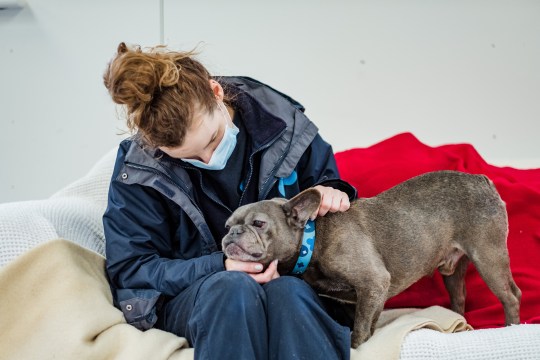 Leonard wasn’t the first French Bulldog to need help from the Blue Cross with health problems.

The team recently helped nurse an eight week old puppy back to health after the poor puppy was bought online for £ 3,000 and given to the charity by owners who said they underestimated the time and care the boy needed .

A third French Bulldog, Fendi, collapsed while on the run with a friend of his owner’s and needed emergency treatment at the charity’s London hospital.

Alison said, “Prospective owners should consider the needs and limitations of these breeds before adopting them.

“As with Fendi, a lack of understanding of the needs of brachycephalic dogs can contribute to the need for emergency care. French bulldogs are not great running partners.

‘Unfortunately, the sniffing and wheezing noises that are often perceived as sweet are actually the noises of breathing difficulties that result from selective breeding aimed at that particular look.

“As the weather gets warmer and we go into summer, higher temperatures pose additional risks as the loss of heat from panting is a real challenge for these dogs.”

Jenna added, “When an animal like Leonard dies for one simple thing we take for granted every day, breathing, it’s so painful. It still hurts now.

“I’ve been with Blue Cross for 18 years and I can really say that this is one of the most painful experiences I’ve ever had.

“We want Leonard’s story to draw attention to the needs and struggles of these races and to make people aware that unfortunately there is no quick fix to their problems.”

MORE: Husky had to eat his friend after owner went away starving dogs

MORE: Girl who battled a giant bear to save her dogs was near death

MORE: How To Manage Your Dog’s Stress When We Get Out Of The Lockdown

The lifestyle email from Metro.co.uk

Get all the important lifestyle news and features straight to your inbox.