Chase Moore poses for a picture with the nine pups that were found abandoned last week. (Courtesy photo)

On July 2nd, Brooke and Chase Moore were out for a walk with their two dogs.

It was their normal evening routine as they took their Yorkie and Goldendoodle for a two-mile walk every day.

However, on that particular night, they noticed that something strange was going on at the end of their walk.

After seeing one of their neighbors driving an Ector County sheriff’s car and noticing a box full of nine puppies, it wasn’t long before Chase and Brooke’s weekend got a little more interesting.

The nine pups (all from the same litter) had been abandoned and abandoned near a cactus pile and needed medical attention.

But because their neighbors couldn’t take them in due to lack of space, Brooke and Chase decided to take over the pups and help them.

“We got into conversation that one of our neighbors’ husbands found those nine pups thrown away,” Brooke said. “We started talking to the neighbor and they had a little one inside and were getting ready to move. Since we don’t have any children yet, we have a little more space and our garage is ready.

After Chase got his truck, the couple spoke to their neighbors a little so they can keep them informed.

“Well, I wasn’t sure what was going on at first, but when the lady told me they couldn’t keep her, I knew we would take her home,” Chase said. “My wife and her love for animals, don’t get me wrong, I’m doing what I can to step in and help … .. it just makes me angry to see how some people here treat animals as if they were disposable.” 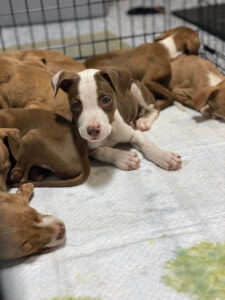 Nine puppies abandoned last week sit in a cage while being cared for after their discovery. (Courtesy photo)

It wasn’t long before Brooke and Chase set up a playpen for the nine pups in the garage.

“We got them some puppy pads and spread them all out,” said Brooke. “It was before the vacation that tied our hands a bit.”

As it was Friday evening and the weekend of July 4th, there was no question of taking the pups to a regular vet.

The only option was to keep the pups safe and sound all night before they were taken to the emergency vet the next day.

“We brought her home around midnight so of course we’re tired and emotions are high,” said Brooke. “When I looked at them, they had super bloated bellies that were a sign of parasites or worms, and I felt terrible for them. I knew we had to get her to the vet as soon as possible. But on a Friday at midnight we knew that we would have to wait until the next day to take her to the emergency room because everything else would be closed. “

Brooke said it had been a long night and her husband Chase stayed up until about 3 a.m. to clean up after the pups.

“As soon as you cleaned one, another made a mess and everyone ran and slipped in it,” Brooke said. “It’s been a long night and a long morning, but I’ve tried to give everyone a bath so they don’t get messy.”

The puppies are estimated at 9-10 weeks. As for the breed, Brooke and Chase are not entirely sure.

“They looked like a pit bull mix but we have no idea,” Brooke said. “We just know that they need a home.”

The next morning, Brooke and Chase were in high spirits, thinking the hardest part would be finding the pups home.

“I reached out to previous customers and asked if they needed a puppy in their new home,” said Brooke. “We had four or five houses in a row thanks to the help of the community.”

Brooke and Chase are brokers at EXP Realty.

Those plans were quickly discarded when the vet told them that some of the pups tested positive for parvo and worms.

“Since this is contagious, we couldn’t give it to anyone else and make them sick, so the list of things changed,” Brooke said.

Taking care of the puppies at home was out of the question due to the seriousness of the matter. They had to be in special care.

At that point, they created gofundme.com to help with veterinarians’ costs.

“We didn’t want money to be the problem when they die,” Brooke said.

People can donate to the site at https://tinyurl.com/9pen5dyw.

“We’re excited about it, but the vet originally told us it would cost $ 1,000 per dog,” Brooke said. “And with nine dogs, once you’ve done the math, you think, ‘Okay, these aren’t my dogs, but at the same time you don’t want to see them die just because someone threw them away.’ We didn’t know what we were going to do, but we also knew that with at least half of them we would need the vet’s help. “

It was a very emotional time for Brooke and Chase, but they were also supported by the West Texas Emergency Clinic.

“Of course I cried and asked all the questions,” Brooke said. “We knew we didn’t want to make our two (dogs) sick at home, how contagious it is. The owner of the place was so cute. She spoke to us and we wanted to take six of them home but the owner was so cute she said since they have the room they would just keep all of them and those who are fine. d treat outpatient and free of charge. “

Unfortunately, on Tuesday one of the pups named Fidget, who was the sickest of the group, died.

However, Brooke says the others are fine and are still recovering.

The next goal is to find a rescue that can take over.

“They’re calling some emergency services in the Dallas area because the accommodations here are congested,” Brooke said. “I don’t know when they will be released. It’s a daily update. But I pray that we will find salvation that will take it and that our part can be done. “

When asked if they would be willing to keep a puppy or two once they recover, Brooke says that is still up in the air.

“My husband had his eye on a couple of them,” Brooke said. “They are super cute and we can keep one of them in the end, but we’ll see.”

There is still an opportunity to donate to their gofundme page and Brooke and Chase are both grateful for the community support.

“It was super exciting,” said Brooke. “When we first heard about the cost of the bills, we thought how cool it would be to bring the community together. It was cool to see. My family isn’t from here, they’re from Michigan, and it’s great to see old high school classmates donate and previous clients donate. I kept watching and seeing all the names. It’s cool to see how it goes on and that people take care of it. There are people who have thrown away puppies and then there are people who help them with life. “

“I’m really shocked,” said Chase. “I wasn’t sure what we were going to get. This is my first gofundme page that I have set up and a few people doubted we could raise any money at all. We just didn’t know what to do. We didn’t want to be put off by the money, but we didn’t want to pay so much out of pocket. It’s surprising, but also warming to know that people really care. “

Which dog breeds are the most popular in Vancouver, BC?