Prodigal pooch: Family and volunteers rejoice when lost puppy is reunited with loved ones

The Lost and Found Pets of Grant County, Washington, a nonprofit group celebrated a “miracle story” when a 5-month-old Shih Tzu puppy, Toby, was reunited with Cristina Cepoi and her Maple Valley family.

The puppy ran away after a collision on June 13 at 3:20 p.m. at the intersection of North Dodson Road and Road 4 Northwest. Cepoi and her family were out with their friend Lurie Buza, who was driving when they collided with another vehicle approaching the intersection.

Among the six people injured in the accident was two-year-old Evalee Sanchez in the other vehicle, who died after being flown to Central Washington Hospital in Wenatchee. The child was a passenger in a vehicle driven out of Moses Lake by Edgar Alba, 22.

Alba was driving south on Dodson Road and tried to turn left onto Road 4 Northwest before the Cepois and Buza. The Cepois car rolled five times.

A car window was broken open by rescue workers and the dog ran away.

The day after the collision (June 14), Cepoi posted on the social media page “Lost and Found Pets of Grant County” and asked for help in finding the lost pet. The group’s thousands of supporters quickly jumped into action, and the organization’s president, Annette Hernandez, reached out to the family for information.

Sheri DeRam, a volunteer and board member of the local group, said the conversation started with getting basic information about Toby from Cepoi and her family.

“What does he like? Does he come across a squeaky toy? Does he know his name? What’s his favorite food for people? Things like that,” DeRam said. “Hopefully we can go out there and firstly spot him and secondly try to get him to safety . “

She said it can be very dangerous for a young animal, especially a Shih Tzu, to survive outdoors amid the heat and dangerous wildlife. On the same day that Cepoi posted to the group, DeRam said the group had already spotted Toby.

DeRam said the group decided to set up a humane, safe trap with some items that could attract Toby without harming the animal. She said once animals are in this “fight or flight” mode, like Toby after the accident, it can be difficult to get them to get around.

Toby was spotted again on June 15, but DeRam said too many people were trying to spot him. She said there would be no way to catch him until he calmed down and felt safe.

On June 16, the group worked on another rescue call, but on June 17 they set off again with the trap, working in shifts, the members changing the search operations.

For the family and the animal group Lost and Found, the reunion was a relief.

“They couldn’t believe Toby was safe,” DeRam said. “It was a miracle he survived, a 5 month old Shih Tzu out there. It’s a pretty dangerous situation, especially in a situation where there is a death in the other car. “

In many cases, someone will find a lost pet for the animal group and one day give up and the family will reunite with their lost pet within a few days. Some cases are more tragic and heartbreaking like this one, she said. She also said rescues and reunions like this would not have been possible without the help of a number of volunteers and community members.

All in all, she said it was just a relief to be a bit happy with this case as a family who had been involved in a serious car accident less than a week earlier was reunited with their young pup.

Casey McCarthy can be reached by email at [email protected] 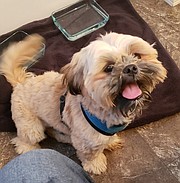