Which Dog Breeds Have the Highest Risk of Becoming Obese?

It is known that obesity is a health risk factor for humans. Heart disease, diabetes, high blood pressure, and joint problems are much more likely in obese people. The same goes for dogs that carry too much fat. In fact, there is consensus among veterinarians that obesity in dogs increases the risk of developing a long list of diseases, including:

A 2018 study published in the Journal of Veterinary Internal Medicine found that obesity was associated with shorter lifespan in the 12 dog breeds studied. The estimated reduction in life expectancy for the overweight group in this data set was up to two and a half years. That is definitely a sobering statistic.

It is obvious that certain aspects of a dog’s lifestyle affect its weight. Sedentary lifestyle, too much or too much food are clear factors that can make a dog obese. However, the effects of genetics should not be overlooked. Obviously, the average Yorkshire Terrier has been genetically wired to grow to an adult weight of around 3 kg, while the genetic makeup of an English mastiff means it weighs around 200 pounds (91 kg).

If a dog’s normal mass is genetically determined, it is reasonable to assume that dogs of different genetic origins have different risks of becoming obese. Such was the reasoning of Camilla Pegram of the Royal Veterinary College, Hawkshead Campus, in the UK, and her research team, who decided to investigate the matter.

Their recent report on the prevalence of obesity in dogs in the UK was a major study as the study population included all available dogs in primary care in clinics participating in the Veterinary Companion Animal Surveillance System (VetCompass). VetCompass electronically collects and gathers data from over 30% of UK veterinary practices. This has grown to be one of the largest veterinary records in the world. A random sample of 22,333 dogs was used in this particular study.

For the purposes of this study, a dog was considered obese if it weighed 15% or more than the breed average. Using this criterion, the prevalence of obese dogs in this study was 7.1%.

Middle-aged dogs (aged 6 to 9 years) were most likely to be overweight compared to dogs under 3 years of age.

Being neutered or neutered roughly doubled the likelihood that a dog was overweight.

As expected, breed played a significant role in the risk of becoming overweight. This current study evaluates 18 breeds based on the relative prevalence of obese dogs in each. To round the data to the nearest percentage point, here is the list of dogs that are commonly affected by obesity. 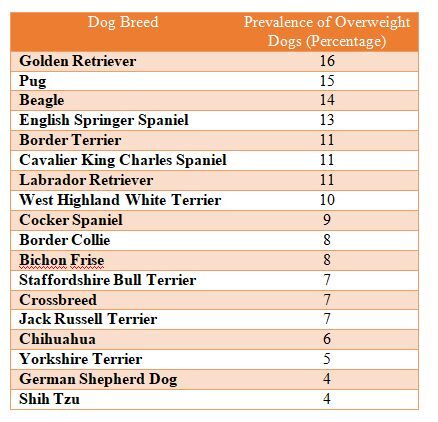 The fact that the dog breed predicts a dog’s likelihood of obesity confirms the fact that obesity in dogs has a genetic component. This information should also provide guidance to dog owners because if your pet is one of those breeds at risk of obesity, you now know that it is advisable to carefully monitor their food intake and exercise accordingly.

Copyright SC Psychological Enterprises Ltd. May not be reprinted or published without permission.